Popular
Pregnant During COVID-19
Pregnancy During COVID-19: Looking After Your Emotional Health
Giving Birth During the COVID-19 Pandemic
What You Should Know About COVID-19 And Your...
A Mother’s Blessing
Keeping Baby Safe from the Start
Fetal Alcohol Spectrum Disorders
Home Healthy Pregnancy Belly Bumps to Baby Mamas: A 40 Weeks Adventure

Most movies about motherhood take a woman from bump to baby in the blink of an eye, amidst a wardrobe of designer duds and perfectly applied makeup in the delivery room. But pregnancy is so much more than a made-for-movie-length journey.

With 40 Weeks, husband-and-wife filmmakers Christopher Henze and Dominique Debroux have created a documentary that covers the full experience, from the positive test to the positively overwhelming joy of welcoming a child into the world—and everything in between. And that’s what Healthy Mom&Baby heard when we sat down with a few of the moms featured in the film to talk about their experiences.

Most movies about motherhood take a woman from bump to baby in the blink of an eye, amidst a wardrobe of designer duds and perfectly applied makeup in the delivery room. But pregnancy is so much more than a made-for-movie-length journey.

With 40 Weeks, husband-and-wife filmmakers Christopher Henze and Dominique Debroux have created a documentary that covers the full experience, from the positive test to the positively overwhelming joy of welcoming a child into the world—and everything in between. And that’s what Healthy Mom&Baby heard when we sat down with a few of the moms featured in the film to talk about their experiences. 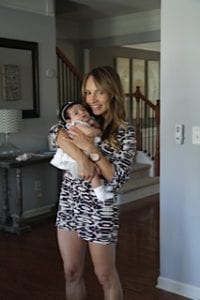 Natalia beams with her daughter Sophia

“I wasn’t sure if I wanted kids,” says Natalia Quintana. “We had 2 French bulldogs, and I felt like those were our babies!” But once she and husband Mauricio saw friends starting families and still doing all the things they loved to do—they knew they were ready. “The first time she kicked, that changed everything,” she says. “I knew I was going to do whatever it took to have the best pregnancy.”

While being filmed for 40 Weeks, Natalia decided to explore birthing with a doula. First up: find out what a doula is! “Once it was explained to me, I was like, ‘Can I have 2?!’” she says. “My doula, Corrinne, was amazing. She never pushed me—she made everything my decision.” Midway through her pregnancy, Natalia opted to have a natural water birth. “I realized that I wanted to try to give my daughter the very best entrance into the world,” she says.

With the encouragement of her doula and husband, Natalia gave birth to Sofia on July 11, 2014. “It’s so awesome to look at her and know that she is a part of me, and part of us,” Natalia says. “Sofia is this beautiful thing that we made together, and it will always bind us—no matter what.”

Natalia urges women to be empowered about their choices when it comes to labor and birth, as she was able to do. “It’s your body; it’s your baby,” she says. “Make the best decisions, and don’t let anyone change your mind.” Vicky Vargas glows from the third trimester of pregnancy

“The morning sickness was consistent… and it wasn’t just in the morning,” says Vicky Vargas. “There were days when I was throwing up under my work desk in the afternoon.” After having experienced a miscarriage in June 2013, Vicky and husband José experienced many mixed emotions when she realized she was pregnant again.

“I was excited, scared, overwhelmed; it was a rollercoaster.” But nothing compared to that 1st ultrasound. “We were so happy when we saw that heartbeat,” she remembers.

Even though she’d made a birth plan, Vicky says that all went out the window: “I had a non-stress test when I was already post-term, and my blood pressure was sky high,” she explains. By mid-afternoon, Vicky was given Pitocin and an epidural; she also had her water broken. After waiting it out in the hopes of having a vaginal birth, Vicky was not dilating, and the decision was made to birth via cesarean. Then came the important part: “I just remember hearing the doctor say, ‘We got a boy!’ My husband and I were so emotional; we couldn’t wait to hold him in our arms.”

After 41 weeks of pregnancy, baby Josiah was born on June 10, 2014. “I honestly feel like Superwoman because of what my body was able to do!” Vicky says.

The realization that she was finally a mom hit her after delivery: “I woke up one morning during my hospital stay and started crying because he was in the nursery, and I missed him,” she says. “It was my motherly instinct that I wanted to be with him 24-7.” 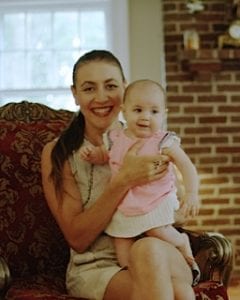 “They say when you have two kids, the work doesn’t just double,” laughs Asya Reznikov. “I say it multiplies to the power of a million.” She and husband Mike Rosenthal welcomed daughter Alcyone on February 22, 2014, approximately 2.5 years after son Ariston was born. “I got into a rhythm with just the one, and now it’s like there’s never enough time.”

Asya began to grow a little anxious as Alcyone’s due date neared… and then passed until she was born a week later. In 40 Weeks, Asya expresses her jitters: “At one point I was basically like, ‘Is she just going to dissolve into my body? Is she never going to come out?’”

Asya wanted to go into labor on her own, and she decided to forego an induction. Almost everyone she knew who had been induced with Pitocin had to have a C-section, and Asya really didn’t want that—she also wasn’t quite emotionally prepared. “There’s the physical fear, but also the mental fear of letting go,” she says tearfully in the film. “It’s like the first step of them going away from you.”

One bit of advice Asya would give other moms-to-be: “Don’t have too tight of a plan or expectation,” she says. “You can’t put that kind of pressure on yourself and think that if it doesn’t happen the way you want it you’ll be disappointed.” 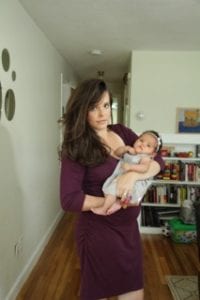 “Before I became a mother, I had no idea what to expect emotionally,” says Phoebe Hamilton. “No one can know until they become a parent.” She gave birth to son Silas in 2010; 4 years later, she and wife Jen were ready to do it all again. However, Phoebe had struggled with a frustrating and exhausting condition in her first (and subsequently, her second) pregnancy: hyperemesis gravidarum, or severe nausea and vomiting.

“My family may not agree, but the hardest part about being pregnant wasn’t just the physical stuff, but the emotional toll it took on me,” Phoebe remembers. She credits her midwife for helping her through the tough times, reminding her that this wasn’t a permanent condition.

Considering her difficult pregnancy, Phoebe says that “labor and birth were amazing” —and she did it all naturally. “I kept changing positions and walking and showering, and it was tolerable.” Not long after she’d begun laboring, she got a little overwhelmed and became adamant that she “no longer wanted to give birth”—then the nurses knew it was time. Willow was born shortly after, on July 9, 2014. “About an hour or 2 later, I felt like a million bucks,” says Phoebe.

For expecting moms or those trying to conceive, Phoebe encourages building a strong support system. “Well-wishers are not the same as supporters,” she advises. “You need people on your side who will help you get through it. Relish the rough patches, because there is always tomorrow. We can’t do it all right. But we won’t do it all wrong.”

Alcohol in Pregnancy: How Much is Safe?

My Baby Cries Every Night: What Is Purple Crying?

Scale Back to Avoid Childhood Obesity Later in...

Count Kicks to Know Your Baby

How Marijuana Affects You, Your Pregnancy & Your...