Take it from the dads of the 40 Weeks documentary, babies change everything!

When you first realize you’re pregnant, there’s a range of emotions followed by body changes, a rounding belly, those unexpected flutters and kicks and fear of the impending unknown: Birth. But it’s a very different time for dad.

When does it really sink in for the guy in your life? We chatted with a few of the fathers from the new 40 Weeks documentary, including its director-dad Christopher Henze for the guy’s take on this full-term trip of a lifetime.

“I went through pregnancy with my wife Dominique 8 years ago,” explains Christopher. “I was always searching for men to talk to about how I saw it.” Coming up short, he knew he had a duty to dads (and moms) everywhere to paint the picture of what pregnancy is really like—all 40 weeks of it. Christopher struggles to describe how his own family changed when it expanded with daughter Gaia. “It was all way more profound than I could have ever imagined,” he says. “To hold my daughter, to feel her pull me toward her—so amazing. A person who isn’t a parent can never understand, but a parent can never fully describe it, either.”

As 40 Weeks followed more than a dozen families movie-goers gained a glimpse into how the papas were also coming to terms. “At first, it’s like being an extra in a movie,” explains new dad Jared Balsky. “It’s all about the mom, and then the baby. You’re in the background being supportive, but you don’t really have that active of a role.” Jared and wife Kelly wanted children but were waiting for the right time. “We found out Kelly was pregnant almost right after we bought our first home. I was nervous at first, but I said, ‘You know what? I think we’re ready.’”

Chris Moody agrees that it’s a different experience for dads. “I’m not carrying the baby; I’m not going through all these changes she’s feeling.” He and wife Victoria were thrown when they first realized a baby was on the way. “Kids were definitely part of our long-term plan, but about a year into the future,” Chris laughs. “Once the initial surprise and anxiety melted away, we were both so incredibly excited.”

Lucien de Voux and his wife, Alex, were timing a pregnancy with his graduation from business school. “We got pregnant immediately, and it was kind of a shock at first.” When telling exactly how quickly it happened, Lucien recalls a funny moment: Alex was working on her PhD and had been in South Africa for a few months. The couple started trying upon her return and was surprised to see a positive test shortly after. “We figured up the due date, and Alex was 5 weeks along… but she had only been back in the states for 3 weeks. A little awkward! We must have conceived on the day she arrived, and it’s calculated a bit differently than we thought.”

Following the different families, Christopher noticed that women go through a fundamental shift as they become mothers, while the changes dads go through are more abstract. “We evolve and understand what it means to be in service,” he explains. “The most powerful archetype we have is the superhero; they are in service to the greater good. And watching these men learn what it’s like to be in service to their wives, to their families… they became more powerful. I didn’t quite understand it as concretely as I do now after finishing 40 Weeks.”

Chris says that his wife has always been very nurturing. “Seeing Victoria as a mother, it’s an incredible transformation, but also a very natural one,” he explains. “She was always prepared to make those sacrifices.” For new parents, he says the biggest fear is the unknown. “It’s what you don’t know that puts you on edge. It can be scary and unpredictable, but at the end of the day, there hasn’t been any situation where I’ve felt like, ‘we can’t do this.’”

While being a father is hard work, Jared acknowledges that it isn’t quite as difficult as he thought it would be. “It’s actually easier and a lot more enjoyable. Just getting to love this little girl is amazing. I can’t put it into words how much fun it is to be with my daughter, Marie.” Jared also commends his wife coming for being such a trooper. “It’s a good thing Kelly went through this and not me—I would never have survived it,” Jared marvels. “I would have constantly complained, and then the whole birth part… yeah, I’ll pass.”

Lucien began to change when he realized just how much his wife and daughter Madeline depended on him. “I started making better choices with my health, exercising and just taking better care of myself,” he says. Echoing Jared’s sentiments about the bond he feels with Madeline Lucien adds: “It’s so fantastic to just be at our house on the weekends and blow bubbles. She’s like my best friend; we hang out and do silly things together all day.”

A common feeling that united these fathers was one of helplessness as they struggled to support their wives. Chris says Victoria’s pregnancy was relatively smooth, but the delivery proved to be slightly more complicated. She had hoped for a vaginal birth with daughter Vivian, but a fibroid tumor was blocking the baby’s exit—cause for a cesarean. “I may have been overbearing at first, trying to do everything I possibly could, but she didn’t need all of that,” says Chris. “The best thing I could do was comfort her and tell her everything would be okay… and be the butler she needed me to be,” he adds.

“It’s not in Kelly’s nature to complain, but I felt bad for her,” Jared says. “We started a ritual of me giving her massages and foot rubs.” He also found ways to inject humor when possible: “Kelly’s feet were so swollen; she told me, ‘I have whale feet!’ I politely reminded her whales don’t have feet,” he joked. Another tip for first-time dads looking to be useful? “Give her your socks when hers don’t fit anymore. Honestly, I thought Kelly was going to start wearing my shoes, too—and I would have given them to her if she asked.”

Lucien was similarly impressed with his wife’s resilience. “There were a few weeks when Alex wasn’t feeling too great, but she was a real superstar,” he says. “I tried to find ways to help: I picked up the slack at home, and I brought her food—that was a welcome treat!” When Alex wanted to eat all the time, Lucien dutifully joined her. “I put on a few sympathy pounds, but it was fun,” he laughs. “I love Alex all the more for going through this. You’re so appreciative of your wife for taking this on to bring you both such joy. I have a whole new respect for women now.

On those awkward incidents

“At one point she said she was dealing with all types of ‘roids: hemorrhoids, her thyroid, the fibroid. And her whole digestive system was doing some interesting stuff. She might let one rip, be all embarrassed and apologize. And I was like, “I’m a guy—I don’t care!”—CHRIS MOODY 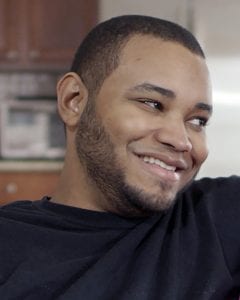 On feeling that first kick

“Everything just disappeared when I finally felt my daughter kick. It was awesome. Before, it was just seeing pictures and watching Kelly change and grow, and I had no actual physical connection to the baby, to this pregnancy. But at that moment, it became so real.”—JARED BALSKY

On going from a twosome to a trio

“Your capacity to love expands when you have a child—and that love translates to your partner, too. To see Alex be a mom, and see her love and dote on our daughter… it’s incredible. I’m amazed when we talk about our lives together and how much more of a family we are now.”—LUCIEN DE VOUX

“As a man, I feel like I have this stalwart nature, this physical strength. But watching women go through pregnancy and birth… holy smokes. I can’t even begin to comprehend the strength a woman possesses. I went out and made a movie to do it and I still don’t understand! That is a
new definition for compassion and strength.”— CHRISTOPHER HENZE

New Dads Can Have Postpartum Depression, Too

Must-Have Toys for Your Newborn Baby

Is Hookah Smoking Safe During Pregnancy?