Until you become a mother, you never quite realize the sacrifices you’re willing to make for your family. For these two moms, that commitment means doing what’s necessary to take care of their little ones.

The two moms profiled here are very different, but they share a common thread: They both know what it’s like to manage the delicate balancing act of keeping their babies happy and healthy while juggling other personal responsibilities.

Chanelle Hensler: A voice for the silent majority

“I felt like a failure as a mother because I couldn’t provide such a basic necessity for my son,” says mom Chanelle Hensler (pictured above with Z’amir and Da’Marko), speaking of her experience with diaper need. She has one son of her own, Z’amir (1), and a godson, Da’Marko (3), who she has raised since he was only 3 weeks old. “They are why I work so hard, and they have shown me how strong I truly am as a mother,” she says.

Originally from Nashville, Chanelle attended high school in Front Royal, VA, before moving to Ashburn, VA, to be with Z’amir’s father. When they broke up, she and the boys came to Arlington, VA, where she participates in a program that provides safe housing and educational opportunities for young mothers.

“When we first moved, it was really tough,” she remembers. “We had no money, and I had to use Da’Marko’s underwear as diapers for Z’amir until we were able to get assistance from the DC Diaper Bank.” While she wasn’t thrilled at the idea of having to ask for help, Chanelle knew that her kids’ needs were more important than dwelling on pride. “You shouldn’t be ashamed to ask for help when you need it. I know I’m not the only mom out there trying to make ends meet.”

Chanelle is right: Her story reflects that of the 1 in 3 families struggling to afford enough diapers. The executive director of Chanelle’s housing program presented her with the opportunity to invoke real change by connecting her to Congressman Keith Ellison, a representative from Minnesota who is passionate about improving the lives of low-income families.

“I told him my story, and we spoke about my troubles of getting diapers and how diaper banks have made it so that I don’t have to choose between going to school and providing for my children,” she says. “He’s very understanding and is really trying to make a difference.” After their first phone meeting, Rep. Ellison hosted Chanelle, Da’Marko, and Z’amir at his office in Washington, DC, where he offered her a huge opportunity to have her voice heard: an internship in his office. “Obviously, I took it!” she says excitedly.

Together with Rep. Rosa DeLauro (CT) and others, Rep. Ellison is working to pass legislation to provide diapers for needy families. “[They] should not have to decide between diapers, food, or rent,” says Rep. Ellison. “We all benefit when children are healthy and families are not worried about how they will care for their infant or toddler.”

Chanelle and her two kids love visiting the zoo and playing at the park. They love to climb and run, and the slide is a favorite. Books are also popular with the boys. Right now, The Itsy Bitsy Spider and The Very Hungry Caterpillar top Da’Marko’s must-read list. “While I’m in school, I read them my homework out loud,” Chanelle laughs. “I don’t know who really enjoys that more, them or me.”

As a part of the housing program, Chanelle is currently enrolled in college and is considering a career in nursing or psychology. Over her summer break, she’s looking forward to affecting change during her internship. “People are so quick to judge. I feel like sharing my story shows how vital diapers are, and also how hard I work to provide for my family,” she says. “I love my kids, and I just want to be a good mother.”

Marina Kearney: Not a handout, but a hand up 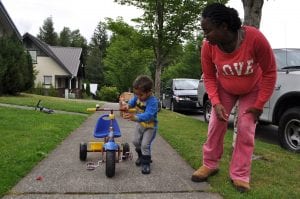 “I don’t really even know how I can express how I feel, to explain what it means to have the support of the diaper bank,” says Marina Kearney (pictured at left with son Frederick). Her voice breaks as she considers her next words. “I don’t think people realize how something like diapers can make a difference in a person’s life. It means so much to feel like I’m in a place where I don’t have to beg, but I can get what I need.”

Hailing from Ivory Coast, Marina fell in love with an American man who was an international teacher in Africa. The pair were married and lived abroad in Mexico and Colombia, among other places, before settling in the United States. They welcomed their first child, Patrick, and it wasn’t long before Marina felt the stresses of raising a little one in a foreign land. She and her husband experienced financial troubles, and the marriage began to crumble beneath the weight of it all.

“I found a job at a restaurant, because I knew I wanted a divorce,” she explains. “He told me I would never be able to make it on my own, but I knew I had to try. I also went to the food bank, which he didn’t like, but it was reassuring to know that there was somewhere I could go if I was hungry.” Marina eventually saved enough to get her own apartment, and the people at the food bank helped her to get on her feet after her marriage ended. “They gave me diapers, wipes, a table, spoons, forks… things that you don’t really think about needing until you don’t have them.”

Following her divorce, Marina wanted to go back to school. Unfortunately, struggles with her ex-husband over custody of their son became too much to bear, and she found it difficult to stay afloat financially. She began to explore other opportunities, including working as a translator. In addition to her native French, Marina speaks 4 other languages; her fluency made her a perfect candidate. But it wasn’t as easy as it sounds. “The work paid well,” she says, “but it was often very far from home. By the time I got a sitter and put gas in my car, I was barely breaking even.”

As she thought about how to take care of her kids and best use her skills, including a college degree in marketing and strong work ethic, Marina earned money by doing odd jobs. She was also able to secure financial assistance with rent and some bills, and getting diapers, wipes, and food from Eastside Baby Corner in Issaquah, WA, allowed her to save her earnings to start her own business. “I started cooking for people in the neighborhood and delivering meals,” she says. Marina’s days typically start at 4:30 a.m., when her fiancé comes home from the graveyard shift and she goes to work at a daycare. When she returns at 8 a.m. and the kids are off to school, she starts cooking.

Even at 9 months pregnant, she is constantly working to provide. “I don’t want to take a break,” she says. “It feels selfish, to receive this wonderful gift and to not do something to better myself.” While Marina has been living in the states for more than a decade, she still has ties back in Africa. “I know how lucky I am to be in America, a place so many people dream to be. I’ve experienced tough times, but I have poor family in Africa,” she says. “They are dying; they are hungry. I worry and want to do for them as well, but it’s not always possible.”

Marina has three boys—Patrick (11), Dominick (5), Frederick (2)—and one on the way. “I’m not sure on the name yet, but I’ve stuck to a theme so far: They all end in ‘ick’!” she laughs. They spend a lot of time together as a family, reading books, going to the park, and riding bikes in their home of Snoqualmie, WA. Her oldest, Patrick, plays the piano, and he earns money in the summer from a lemonade stand to pay for lessons as well as soccer equipment. “I want my children to grow up understanding the importance of working hard,” she says. Patrick also works crossing-guard duty at his school; Marina feels strongly about learning a service of giving and being selfless. “I tell him, ‘I want you to live your life giving back and helping others.’”

By addressing her physical needs, Eastside Baby Corner has also given Marina something more than diapers: self-respect, confidence, and dignity. “I came to America to be more than just a beggar,” she says, the passion and determination radiating from her as she speaks. “I am confident that this will not be my life forever. The support I’ve gotten from the Baby Corner has empowered me so much. They give women like me a voice. I’m an educated, strong, fierce, smart woman—and I know that one day, I’m going to be the one donating diapers to another woman in my shoes.”