Food, water, shelter—these are all basic needs. For babies, there’s another item that tops that list: diapers. In the US, there are 5.3 million children ages 3 or younger living in poor or low-income families. Shockingly, there are no state or federal safety nets that help families purchase diapers. As a result, 1 in 3 families experiences “diaper need,” the struggle to buy and have enough clean diapers for their youngest children.
+++When a baby doesn’t have enough diapers, all sorts of problems and choices arise. They might be exposed to health risks from being left in a dirty diaper too long. Without a full day’s supply of diapers, babies can be turned away from childcare and early education centers, forcing mom or dad out of work or school.
+++Fortunately, there are organizations that do exist to help families overcome diaper need: The National Diaper Bank Network (NDBN) works with more than 230 community-based diaper banks across the country to both help families with diapers and other diapering essentials. In 2014, the NDBN distributed more than 35 million free diapers to more than 1 million babies.
+++This year, Healthy Mom&Baby is partnering with the NDBN to raise awareness and to share the names, voices and stories of the families in every community who are struggling to provide for their youngest children.
+++As we spoke with moms affected by diaper need each one shared a similar truth: This small gesture—donating diapers, or dollars for diapers to families in need in your community may not seem like much, but it can mean the world when you’re struggling to take care of your family.

Choosing Between Diapers and Gas

“I think there are a lot of misconceptions about people who get help from the diaper bank. We work very hard to make ends meet… I go without a lot of things to make sure my kids are taken care of.”
Lacey Cotton, mom to Alexis, Jerrod & Aurin 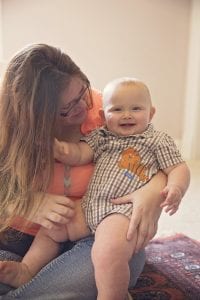 Lacey gave birth to her youngest son 6 weeks earlier than planned. “We knew that we would have certain expenses with the baby, but then having to bump all those payments up… we weren’t quite prepared,” she says. With her baby now 10 months old, Lacey is working long hours to support him and her 6-year-old son while her boyfriend takes care of the kids at home. “I use my car for work, and there are some days when it feels like a toss-up: Do I spend $30 on gas or $30 on diapers?”
+++Lacey first came in contact with her local diaper bank through her church, which frequently donates diapers. “It’s so important to give back to your community, to pull together and support one another—especially where women and children are concerned,” she says. “You never know when something is going to come along, and a family might need just a little more help. Getting support from the diaper bank has made a huge difference for my family.”
+++Lacey’s young son also has sensitive skin, which means she has to be careful about which diapers she uses and how frequently she changes him. “Knowing that I have enough diapers, and that I won’t have to leave him in a dirty one too long, risking him getting a rash, is such a relief,” she says. “I just want my kids to be happy and healthy.”

Finding Hope and Paying It Forward

“Knowing I have diapers for my children means one less thing to worry about. It takes some of the stress away, and I know that there’s hope out there.”
Venessa Baez, mom to Jean Carlos, Raul & Nathalie 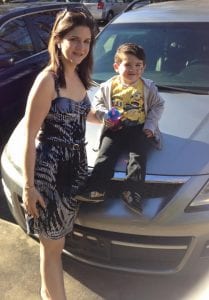 When Venessa Baez’s second son was a baby, she knew something wasn’t quite right with his eating. “He was always spitting food up, and he couldn’t really consume it properly,” she says. Diagnosed with pancreatic divisum, Venessa’s son had to be a on a feeding tube to help with his chronic pancreatitis. Already living paycheck to paycheck, Venessa was dismayed to learn that her Medicaid benefits would not be enough to help her shoulder the weight of the mounting medical costs.
+++Venessa found support from an Early Head Start Home Base Program. “A nurse would visit me every single week, bringing me diapers,” she explains. “I also received diapers from an organization called Welcome Baby, and I saw these stickers that said ‘Diaper Bank of North Carolina.’ These groups, with people just giving out of the goodness of their hearts… they’re truly godsends.”
+++There were definitely moments when times got tough, Venessa recalls. “I would be exhausted, and I didn’t want to do the home visit, but I stuck with it,” she says. “And the Early Head Start Program changed my life: They believed in me and helped me get a job with Durham Connects, where I’m able to help moms and give back to the community that was there for me when I needed it. It’s a ripple effect.”

Being a Great Parents, No Matter the Circumstances

“I have a job to do as a parent, and that’s make sure my children have what they need.”
Natasha Rivera-LaButhie, mom to Liana, Hailey & Angel 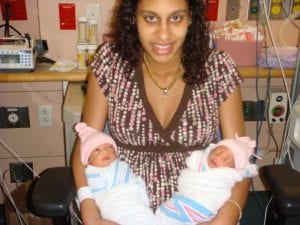 Natasha Rivera-LaButhie was overjoyed to learn she was expecting—then her doctor delivered the news that she was actually pregnant with triplets. “We were prepared for one child,” she says, “but finding out it was multiples? Say what? Needless to say, my husband and I knew there would be a lot more costs coming our way.” Additionally, Natasha did not qualify for her employer’s medical benefits as a new hire; she received state medical insurance instead.
+++Before entering her 3rd trimester, Natasha lost one of the babies and began having medical complications, becoming hospitalized for 75 days before giving birth. A hospital resource staff person encouraged Natasha to sign up for the diaper bank. Though she was initially hesitant about asking for help, bills were piling up. The twins’ daycare also required a full day’s supply of diapers, and she would have to leave work to bring more if they ran out. “I threw my pride out the window and signed up,” Natasha says. “It helps me to be a better parent. I have more time to tend to my kids’ needs, and I know they’re being taken care of.”
+++Natasha’s local organization supported her with more than just diapers: “It was actually a church. I remember coming in there sometimes, feeling tired of my job, my bills… I felt like a bad parent because I couldn’t afford these basic necessities for my kids,” she says. “But people there didn’t judge me; they would welcome me with a smile and offer to pray for me and my family—it really meant a lot to have their encouragement and support.”
+++These days, Natasha enjoys quality time playing outside and reading books with her family and working with the New Haven MOMS Partnership. “Sometimes I meet women who don’t want to ask for help,” she says. “To those moms I say, ‘Why would you not take advantage of a service that solely exists to help you take care of your family?’”

Creating the Help That’s Needed Most

“A healthy supply of diapers keeps babies clean and dry, but it also reduces parent stress… diapers help parents be able to further their education, as well as find stable housing and employment.”
Rachel Alston, mom to Ayva & Hazel 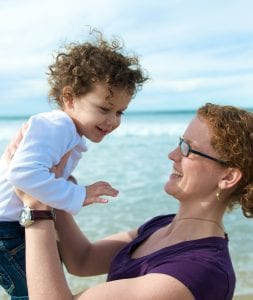 Portland mom Rachel Alston found herself in a tight spot when she had her daughter, Ayva. Her husband was in school, and Rachel was staying at home with the baby. They already received assistance from other programs, but diapers were proving to be a pressing expense. “I don’t think I truly understood diaper need until I experienced it myself,” she says. “I’ve also found that most people don’t know that there isn’t government assistance for families needing diapers.”
+++Unfortunately, Rachel was not able to find a diaper bank in her area. “Eventually we turned to cloth diapering, because we were lucky enough to have a washer and dryer in our unit,” she says. “But I know that some families are just not in that situation, because they’re in transitional housing or possibly even homeless, and most schools and daycares will not accept cloth diapering as an option.” Determined to help and hopefully decrease the number of moms in her position, Rachel founded PDX Diaper Bank, the first of its kind in Portland.
+++“Thinking back on that time in my life, I remember being so stressed that I couldn’t provide this basic necessity for my child,” Rachel recalls. “Being a parent is challenging enough without having to count diapers or worry if you’re going to make it through the week.” As executive director of PDX Diaper Bank, Rachel meets families from all walks of life who experience that stress and worry. “They’re just trying to cope and survive day-to-day living—overcoming homelessness, securing stable employment, battling health problems… all while trying to raise a child,” she says. “They are true everyday heroes.”
+++If there was one thing Rachel could communicate to people considering donating to or even starting a diaper bank, it would be that there is such a great need, even if you don’t see it outright. “There aren’t enough diaper banks in the United States to completely close the diaper gap, but that is slowly changing as advocates educate communities about diaper need and the impact it has on families,” she says.